Editor’s Note: This is a republishing of an article from 2009. We mourn the loss of our colleague, journalist Chana Garcia and her brave fight against ovarian cancer.

The best and worst thing about cancer is life is never the same after you’ve been diagnosed. For me, being healthy used to mean fitting in a lunchtime workout at the gym, but these days, I measure my progress by blood tests and CT scan results. Hearing my doctor utter three mundane words, “Everything looks good,” is like winning a victory lap–the result of enduring dozens of inch-long needles that have ruined my veins, the impending nausea, and the countless days I was too sick to get out of bed.

But somewhere along the way, through the fear, tears, anger, pain, and dizzying realization of my mortality, I shed the vestiges of those overwhelming emotions like a snake sloughs its skin and emerged a winner–a survivor. How I arrived here is a lesson in self-advocacy.

In February of 2008, after suffering weeks of indigestion and bloating, I started seeing a gastroenterologist. Because I celebrated Christmas and New Year’s in Mexico, I thought perhaps I had eaten too many roadside tacos or accidentally drunk the water.

When a prescription for heartburn did little to combat my symptoms by late March, my doctor ordered an ultrasound to determine why I was losing weight while my bloating continued to worsen. He called me when the test revealed two large masses on my ovaries. “One is the size of a softball,” he said, concerned. “You need to get on your gynecologist’s surgery schedule today.”

Panic instantly set in, but when I spoke to my GYN, she thought a cyst she had found on my right ovary years before had simply grown and needed to be removed. She promised to follow up with me when she returned from vacation a week later. I recall her casual response: “Your chances of having ovarian cancer are low.”

Her nonchalance was unsettling, and I insisted on getting answers immediately. I called her office at least five times a day while she was away. I don’t know what I expected her staff to do, but my daily harassment finally prompted the nurse practitioner to administer a CA-125 blood test, which measures the concentration of CA-125, a protein present in malignant tumors. CA-125 is found in greater concentration in ovarian cancer cells and has become one of the more reliable ways to identify and monitor the status of ovarian cancer. 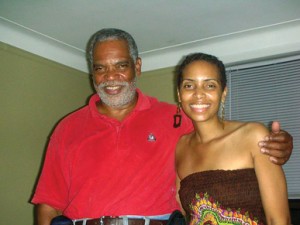 Garcia and her father

Within a week of taking the test, I was diagnosed with ovarian cancer, stage III C——cancer was in both ovaries and had spread to the lymph nodes, and deposits of cancer were seen in my abdomen. Anything beyond stage II is considered advanced. At stage IV, the most advanced phase of ovarian cancer, the disease has usually spread to other organs. At first, I was in disbelief, then shock. After speaking with my surgeon about plans to undergo a full hysterectomy and learning this would make it impossible for me to have children of my own, an overwhelming sadness set in. It’s one thing to choose not to have children; it’s another to have the choice taken from you. To make matters worse, my boyfriend and I had recently been discussing starting a family. Like most women, I envisioned the baby I would carry in my belly and the family we would have together. That’s when my sadness turned into anger.

I wasn’t supposed to be a statistic of ovarian cancer. This is a disease that primarily affects white women over the age of 50. As a 33-year-old black woman, I didn’t fit the bill. I’m an example of what happens when the medical community engages in age- and race-based biases. I don’t think it occurred to my gynecologist, who’s also a young black woman, that ovarian cancer could happen to me.

Raising Awareness Through An Alliance

After an aggressive surgery–called radical debulking–that included a full hysterectomy to remove my tumors, as well as the removal of one of my lymph nodes, I underwent eight rounds of chemotherapy, dropped 25 pounds, and lost all my hair. My treatment regimen was tough. Each cycle included three drugs, given over two weeks, twice a month. The combination fatigued me, but I forced myself to get out of the house. I had no plans to let cancer get the best of me. I walked around my neighborhood, visited my friends and family, and looked forward to the day when I would feel like my old self again. I was determined to fight through all the physical, emotional, and psychological anguish of this beast and to help other unlikely victims become better advocates for their health.

A rare disease, ovarian cancer accounts for about 3% of all cancer diagnoses, but is the fifth leading cause of cancer-related deaths among American women. It’s relatively uncommon in the black community, but as is the case with most cancers, it’s more deadly when it affects us. Black women are often diagnosed in the disease’s later stages and are twice as likely as white women to die from it. With an overall five-year survival rate of 46%, it’s easy to see why the outcomes are more often than not unfavorable.

However, the more research I did, the more women I uncovered beating the odds——such as Barbara Mason, an 18-year survivor from South Carolina; Mary Jackson Scroggins, a 12-year survivor from New York; Kia Riddick-Taylor, a casting director in Florida who has been cancer-free for just over one year; and Sophia Carre, a seven-year survivor in Washington, D.C. These women all had stories like mine. They all sought treatment for seemingly innocuous conditions: bloating, digestive problems, and sudden weight loss or gain——all classic symptoms of ovarian cancer.
This disease has been mistakenly referred to as a “silent killer” because it was once thought to be asymptomatic. But doctors are now realizing that most ovarian cancer patients suffer from gastrointestinal problems at some point before their diagnoses. 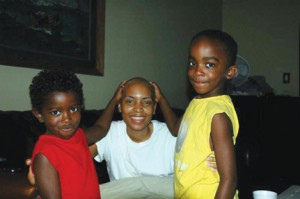 Making headway in the fight to cure this disease has been slow. Less than 20% of all cases are found in stage I, but with advances in research and treatment options, doctors and clinicians are encouraged.

“[Over the years] there has been increasing evidence that radical debulking is associated with improved survival of patients with advanced ovarian cancer,” says Dr. Kevin Holcomb, associate professor of clinical obstetrics and gynecology at the Weill Medical College of Cornell University and one of black enterprise’s leading doctors (see “America’s Leading Doctors,” May 2008). “It’s important for women with ovarian cancer to seek out doctors who have experience in treating the disease.”

There is some promising research with the medical drug thalidomide, which was used during the 1950s to treat insomnia and a host of other ailments, but was known to cause severe birth defects. Dr. Levi Downs Jr., a leading researcher at the Masonic Cancer Center at the University of Minnesota, has been at the forefront of this clinical trial effectively using thalidomide in tandem with chemotherapy to treat patients whose cancer is recurrent–about 70% to 90% of all ovarian cancer cases. According to Downs, 30% of his patients have seen a complete response, meaning their cancer “went away.” Others he’s treated are showing longer cancer-free periods.

The medical community has also seen significant improvements among patients with ovarian cancer who are treated with intraperitoneal, or IP, therapy, in which chemotherapy drugs are delivered directly into the abdomen. Dr. Carol Brown, gynecologic oncologist and associate attending surgeon at Memorial Sloan-Kettering Cancer Center in New York City, and another of be’s leading doctors, says, over the last few years, IP has become standard care for some ovarian cancer patients and has been shown to improve survival rates. Other drugs such as Avastin, commonly called a “smart bomb” drug because it cuts off the blood supply to cancerous tumors, are also improving the outlook for many patients.

Of equal importance is a patient’s personal vigilance: paying attention to your body, making sure you keep regular checkups, asking your doctor questions, seeking a second or third opinion, and speaking up when you suspect something is wrong. Personal vigilance is the most important lesson I learned from this experience. Had I not pressured the staff at my GYN’s office, my prognosis could have been fatal.

Fortunately, my pathology came back better than expected and I was diagnosed with a borderline tumor, which is a low-malignant form of the disease. I’m still undergoing treatment, but I’m on the road to recovery.

When I need a bit of encouragement to get through a tough day, I turn to the community of ovarian cancer survivors and our advocates who’ve become like my second family. An unfortunate circumstance may have brought us together, but it gave us a voice to inspire change and promote awareness.

This article originally appeared in the September 2009 issue of Black Enterprise magazine.

The post When the Killer Is Not So Silent appeared first on Black Enterprise.