New sneakers are a luxury not frequently afforded to many people living below the poverty line. As a result, taping, stitching, and wearing old, holey shoes is an unfortunate norm, not a fashion statement, for those struggling to make ends meet and afford basic life necessities. While poverty is an epidemic that many try to escape, it also appears to be a source of inspiration for some fashion designers selling high-end derelict-looking items.

Social media users blasted Golden Goose Deluxe Brand, an Italian high fashion sneaker brand, for its new $530 “Superstar Taped” sneakers, which are covered with duct tape across the toe and heel. Nordstrom’s website describes the “distressed leather sneaker” as having “crumply, hold-it-all-together tape” and a “grungy rubber cupsole.” Twitter users, however, said the scuffed, battered-looking shoes are offensive and make a mockery of the poor.

There are people in the world wearing plastic bags as shoes because they can’t afford any but these HIDEOUS things are selling for $500, one person wrote in a profanity-laced tweet that’s been liked more than 49,000 times.

Others tweeted that the shoes are distasteful and represent the epitome of capitalism.

okay maybe i’m being dramatic but i remember seeing kids getting harassed and made fun of endlessly in school for having shoes that looked like this. this is extremely distasteful. https://t.co/h3RAKmiY5d

i think peak capitalism is selling shoes characteristic of those who can’t afford new ones for $530 https://t.co/CJuKEQSpgO

One user said paying hundreds of dollars for worn-looking shoes is a waste of money.

I will never, in my entire life, understand the “distressed” trend/style. I could go to Target, buy a pair of Keds/Keds knock-offs, and wreck them like this for less than a quarter of the price of those things. Why does anyone waste their money like this?

Another user said that the sneaker, which is part of Golden Goose’s new fall ’18 collection, is glorifying poverty.

The ‘Golden Goose’ here is anyone who would consider paying $530 for these glorified poverty sneakers. #auspol pic.twitter.com/NeSS40Kksh

On the other hand, some defended Golden Goose, noting that the Venice-based brand is known for selling vintage clothing since its launch in 2000. “Why are people acting like Golden Goose making beat-up sneakers is new? They’ve BEEN around. People in Italy actually enjoy that distressed look in everything,” wrote a private Twitter account user, according to The Independent.

Profiting Off The Poor

This is not the first time that Golden Goose has come under fire for its shabby-looking merchandise—nor is it the only luxury designer selling products like this. Back in 2016, the brand was blasted for a similar style shoe that included ripped laces and silver duct tape. In response to critics, Golden released a statement, calling itself a pioneer in pre-distressed footwear and clothing.

“[Our] company is proud to highlight its pioneering role in the booming of the distressed look, one of the current biggest trends in fashion,” the Venetian label said in a statement to Us magazine. “The duct-tape reinforcements appearing on the [Superstar sneaker] style pay homage to the West Coast’s skater culture — professional skaters, who have inspired the brand’s shoe collections from the beginning, repair their shoes with the same kind of tape,” reads the statement, reports FootwearNews.com.

Maison Margiela, a French luxury fashion house, also currently has scruffy-styled sneakers on the market. The brands leather “Fusion Sneakers” are decorated with glue, duct tape, and stitches. They’re being sold for over $1,600. 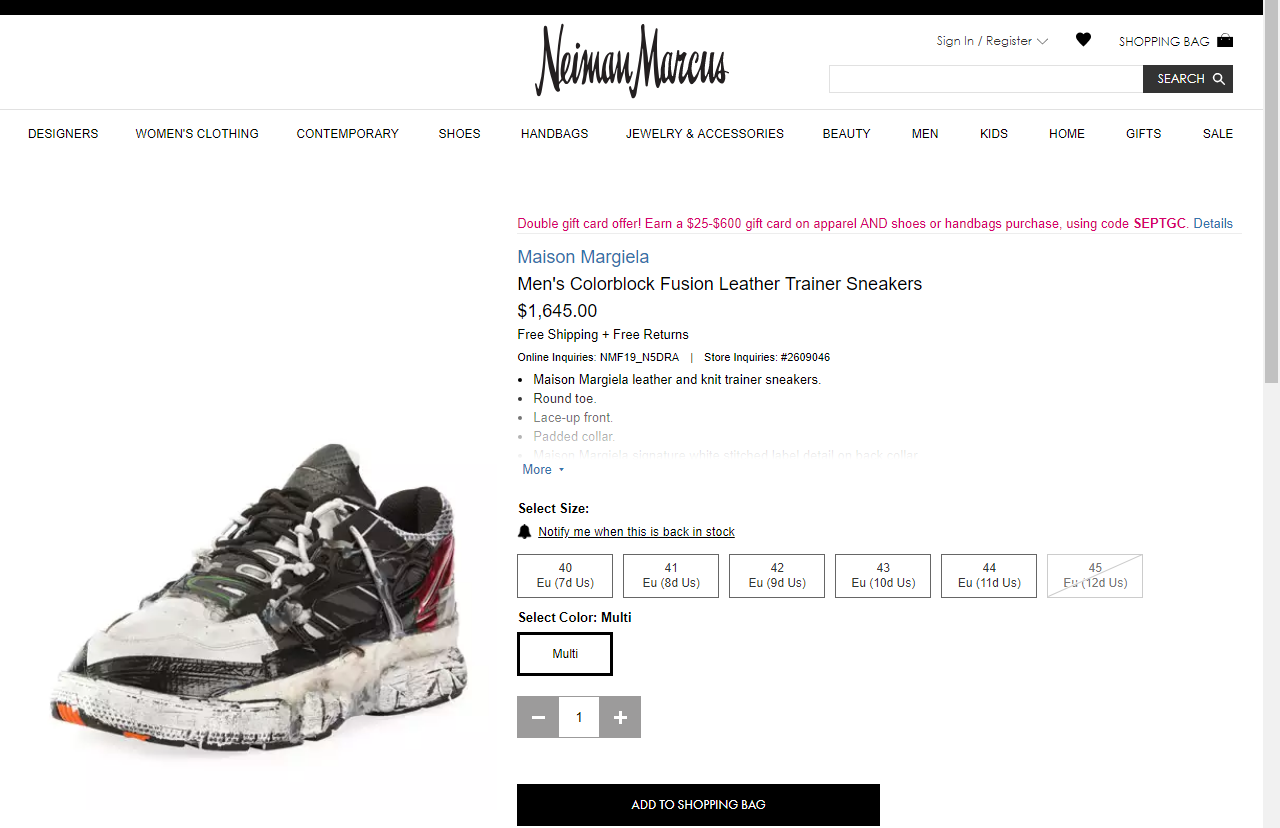 Likewise, hip-hop star and fashion designer Kanye West caught a lot of flak with the release of Yeezy fashion collection, which featured dilapidated merch that he, himself, described as “ripped homeless sweaters.” It was priced at over $2,000.

Meanwhile, a Canadian restaurant owner was slammed last summer for opening a bar in Brooklyn, New York, that featured a wall decorated with bullet holes. Critics accused the owner of glamorizing the violence and poverty that existed in the Crown Heights neighborhood back when it was largely populated by working-class people of color, before being gentrified.