JAMESTOWN, Va. (Reuters) – U.S. President Donald Trump, under fire in Washington for verbal attacks on racial minority lawmakers, condemned American slavery on Tuesday at the 400th anniversary of the first legislative assembly in Virginia and was briefly interrupted by a protesting state legislator.

Trump gave a scripted speech at the site of the first legislative assembly in Jamestown, Virginia, after touring the Jamestownchurch and a mock 1619 village.

In his remarks, he honored the first people to form a government in what would become the United States but also recognized their importation of slaves in 1619 in the same region.

“It was the beginning of a barbaric trade of human lives,” he said. “Today in honor, we remember every sacred soul who suffered the horrors of slavery and the anguish of bondage.”

Trump‘s comments, in which he also honored African Americans’ contributions to U.S. history and quoted civil rights leader Rev. Martin Luther King Junior, followed two weeks of incendiary remarks about four Democratic women of color in the U.S. House of Representatives and an African-American lawmaker, Elijah Cummings, all of whom have been sharp critics of the president.

Trump has blasted Cummings for not doing more to improve the plight of Baltimore, a largely black city, which he said is rodent-infested. Trump has faced accusations of racism and bigotry for the remarks. 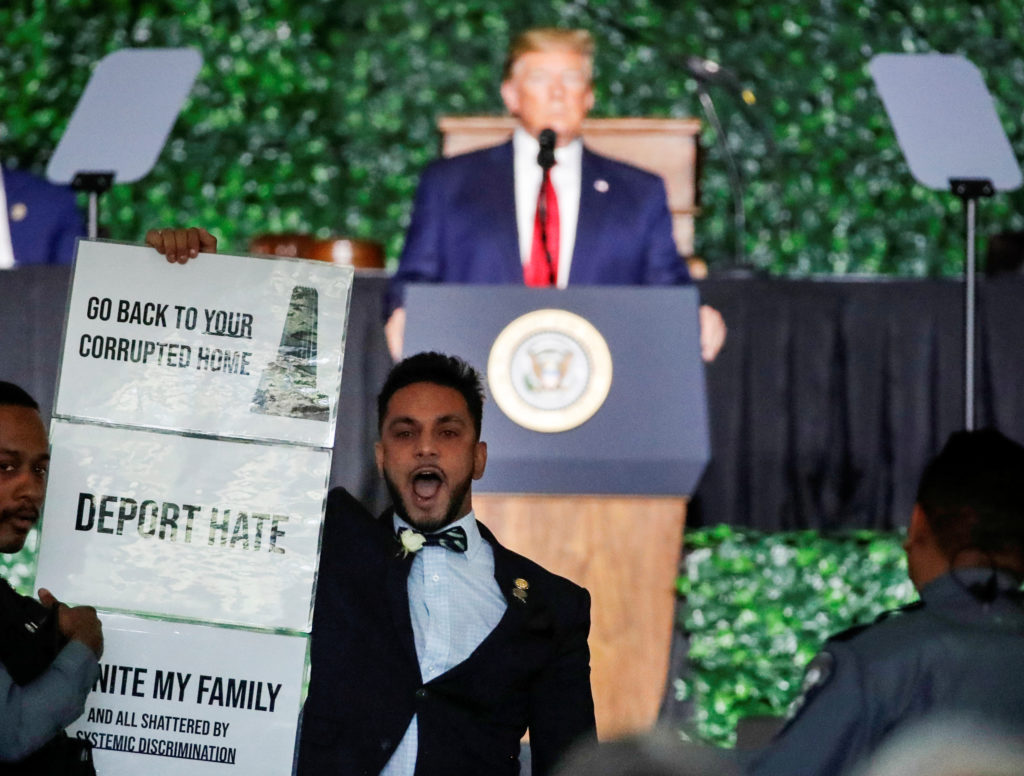 A protester interrupts U.S. President Donald Trump as he speaks at an event celebrating the 400th anniversary of the first meeting (July 30, 1619) of the Virginia state legislature in Historic Jamestowne in Williamsburg, Virginia (REUTERS/Carlos Barria)

Virginia’s black state legislators had said they would boycott Trump‘s appearance after his harsh comments about the minority members of Congress. A statement from the Virginia Legislative Black Caucus said it was “impossible to ignore the emblem of hate and disdain that the president represents” while he continues to “promulgate policies that harm marginalized communities and use racist and xenophobic rhetoric.”

Trump‘s address in Jamestown was interrupted briefly by Democratic Virginia Delegate Ibraheem Samirah, who shouted and held up a sign that said: “Go back to your corrupted home. Deport hate. Reunite my family and all those shattered by systemic discrimination.”

Samirah, a Palestinian American dentist, later said in a Twitter post that he had disrupted Trump‘s speech at Jamestown “because nobody’s racism and bigotry should be excused for the sake of being polite.”

I just disrupted the @realDonaldTrump speech in Jamestown because nobody’s racism and bigotry should be excused for the sake of being polite. The man is unfit for office and unfit to partake in a celebration of democracy, representation, and our nation’s history of immigrants. pic.twitter.com/0okD7eRVer

“The man is unfit for office and unfit to partake in a celebration of democracy, representation and our nation’s history of immigrants,” Samirah said.

The Virginia Republican Party later released a statement accusing Samirah of being anti-Semitic.