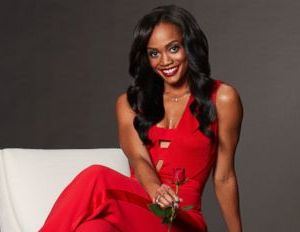 In a clip that immediately started making news last week, The Bachelorette broke down in tears and said something black women all across the country could agree with: “you have no idea what it’s like being in this position.”

If you’re not familiar with the world of first-impression roses, two-on-one dates, and fantasy suites, let me give you some background. Rachel Lindsay, a Dallas attorney, is the first black bachelorette in the 13-season history of the ABC series.

Before landing this historic gig, she was one of the final three women—and a fan favorite—on the previous season of The Bachelor with Nick Viall. The next season’s lead is usually picked from one of the previous runners-up, and the black contestants don’t usually get very far. After 21 seasons, we’re still waiting for the first black bachelor.

There are a number of think pieces about The Bachelor franchise, its lack of diversity, and its fraught relationship with race. And there are a lot of watchful eyes looking to see if Lindsay, and the most-diverse bunch of suitors ever, can change that.

You can count my two eyes among that bunch. I’ve been following both shows (and, yes, I’m ashamed to admit, Bachelor in Paradise—which had its own racially tinged scandal last week) for the last three years.

Like the rest of Bachelor Nation, I became a fast fan of Lindsay’s. I particularly appreciated how open she and Viall were, breaking the taboo in their conversations about race. I loved that on her hometown date she took him to a black church. And I wished all of America was watching when her family gently but firmly pushed back after Viall said he was colorblind with a reminder that though that may be true, the world is not, and that if he were to end up with their daughter he’d need to learn how to face that.

So for me it was a matter of when, not if, race would come up this season. And it didn’t take long. Just four weeks in, Lindsay was forced to acknowledge the pressure that comes with being the first black, or the only black, when there was a confrontation between two of her suitors and afterward the white man described the black man as “aggressive.”

I think her tears resonated with black women everywhere, who have often had to temper their emotions as they navigate the realities of constantly feeling judged as examples of their entire race and gender. How Lindsay ultimately deals is still to be seen—or, quite literally, to be continued—but it’s a conversation we’ll be having long after the final rose.