If it was up to legendary filmmaker Spike Lee, BlacKkKlansman, his latest film to date, would be screened in Donald Trump’s executive mansion.

The new film takes place in the 1970s and is based on the real-life experiences of Ron Stallworth, the first African American detective to join the Colorado Springs police force. In addition to facing a number of racial barriers, Stallworth managed to infiltrate the Ku Klux Klan as an undercover and befriend former KKK Grand Wizard David Duke through a series of phone conversations. To complete the operation, Stallworth worked with his partner, a Jewish cop played by Adam Driver in the movie, who pretends to be him at KKK meetings.

Like many Spike Lee joints, the overarching theme of BlacKkKlansman underscores the prevalence of racism and the ongoing fight for racial equality. It opens with scenes from Birth of A Nation, a notorious silent picture released in 1915 that glorified the Klan and demonized black men. The controversial drama has been deemed a classic American film and was even screened for then-President Woodrow Wilson along with members of Congress and the Supreme Court.

“Birth of a Nation was shown in the White House. Woodrow Wilson saw it and he said it was like ‘writing history with lightning,’” Lee told Black Enterprise. “I think BlacKkKlansman should be shown in the White House—and make sure you put Jeff Sessions in the front row because there are certain things that people are wearing [in the film] that he might be in possession of!” Lee joked, apparently making a reference to the robes worn by Klansmen. 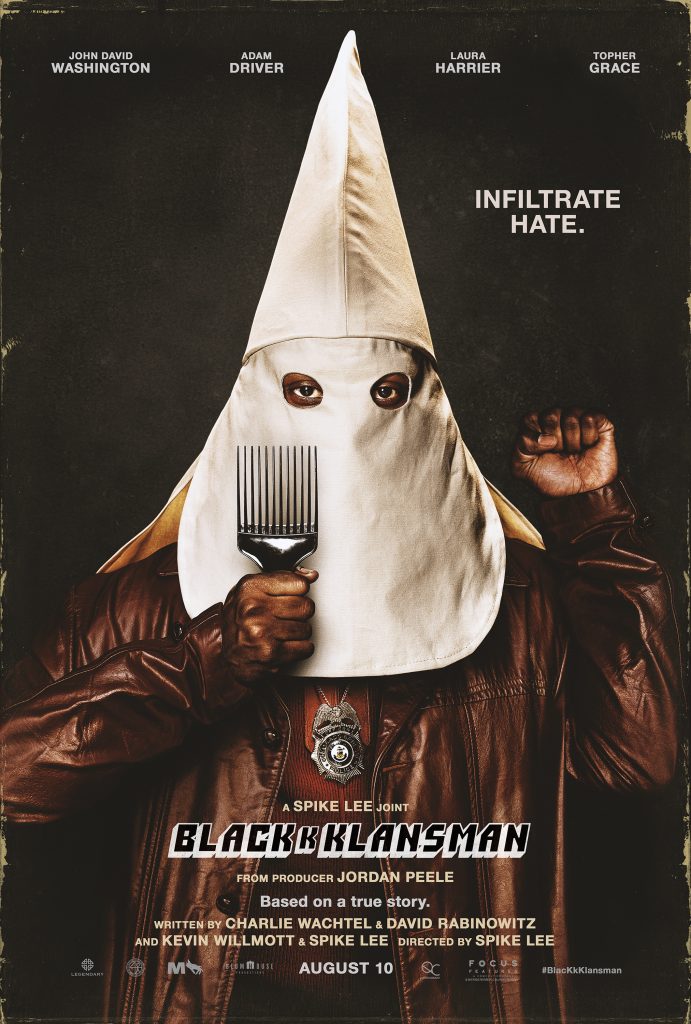 Telling A Part of History

The context of the movie is so surreal that Lee admitted that he had a hard time believing it was true, himself. In fact, when BlacKkKlansman producer Jordan Peele told him about the story, Lee initially thought about Dave Chappelle’s popular black KKK member sketch. Nonetheless, he pounced on the opportunity to create a film about a remarkable piece of American history that few Americans know about.

To tell the story, Lee cast John David Washington, the son of Oscar-winning actor Denzel Washington, for the lead role as Stallworth. “I just knew he could do it. I just offered him the part. He didn’t have to do a read for it. He didn’t have to do a tape [or] audition,” said the movie director. “I know talent when I see it. Many people have got their first roles in my films over the last 30 years,” he said, noting Halle Berry and Rosie Perez.

Washington, who graduated from an HBCU, says that he, too, was surprised when Lee told him about Stallworth’s story. “I went to Morehouse, class of ’06, so I learned a lot about my culture and our history [but] this one kind of slipped through the cracks,” he said.

The 32-year-old actor added that working on the film changed his perspective about police, especially those of color, and he hopes it will change how they are viewed by society as well. “I had no idea what it was like to be an African American cop and I’m hoping people will get the chance to see what it’s like with this film,” said the star of HBO’s Ballers. “We need to start celebrating more men and women that look like us that are police and are doing their job correctly. It’s a thankless job.” When asked if he felt anxious or excited for his father to see the movie, he cooly responded, “I hope he likes it.”

BlacKkKlansman takes several jabs at President Trump and ends with a powerful scene that suggests that race relations in the U.S. are getting worse. It also includes a handful of scenes with the words “wake up,” a signature expression in Lee’s work.

“My most famous phrase for all my films is ‘wake up.’ School Days—that film came out in 1988—ends with Laurence Fishburne saying ‘wake up.’  Do the Right Thing (1989) begins with Samuel L. Jackson saying ‘wake up,’” he proclaimed. The term “woke—that’s that new sh-t. We were saying ‘wake up’ in ’88!”

BlacKkKlansman will be released in theaters Aug. 10, 2018.

The post Spike Lee: ‘BlacKKKlansman Should Be Shown in the White House’ [Video] appeared first on Black Enterprise.