Shayla Janel is an entrepreneur, fashion activist and creator of “Slay for a Change” a bold initiative using fashion to spread awareness about police brutality as well as cultural appropriation. “After the untimely and unjustly death of Sandra Bland I felt sadness and frustration, so I conceived the idea for Slay For A Change,” said Shayla Janel. “Then it was the horrendous murders of Alton Sterling and Philando Castile that gave birth to my vision. At the time, the whole world seemed to be in shock and in mourning. As a fashion lover, I was following most of the major fashion designers, publications, and influencers on social media and I noticed an eerie silence from the fashion community. I thought to myself, “wow…this is an industry that profits so much from the culture but can’t even acknowledge this tragedy. “In music, sports, television, and etc., people were seemingly taking a stand, she said. But the fashion industry seemed to care less. So, I took our police brutality issues to their front door—Fashion Week. It was a very passive aggressive way of being an activist.” 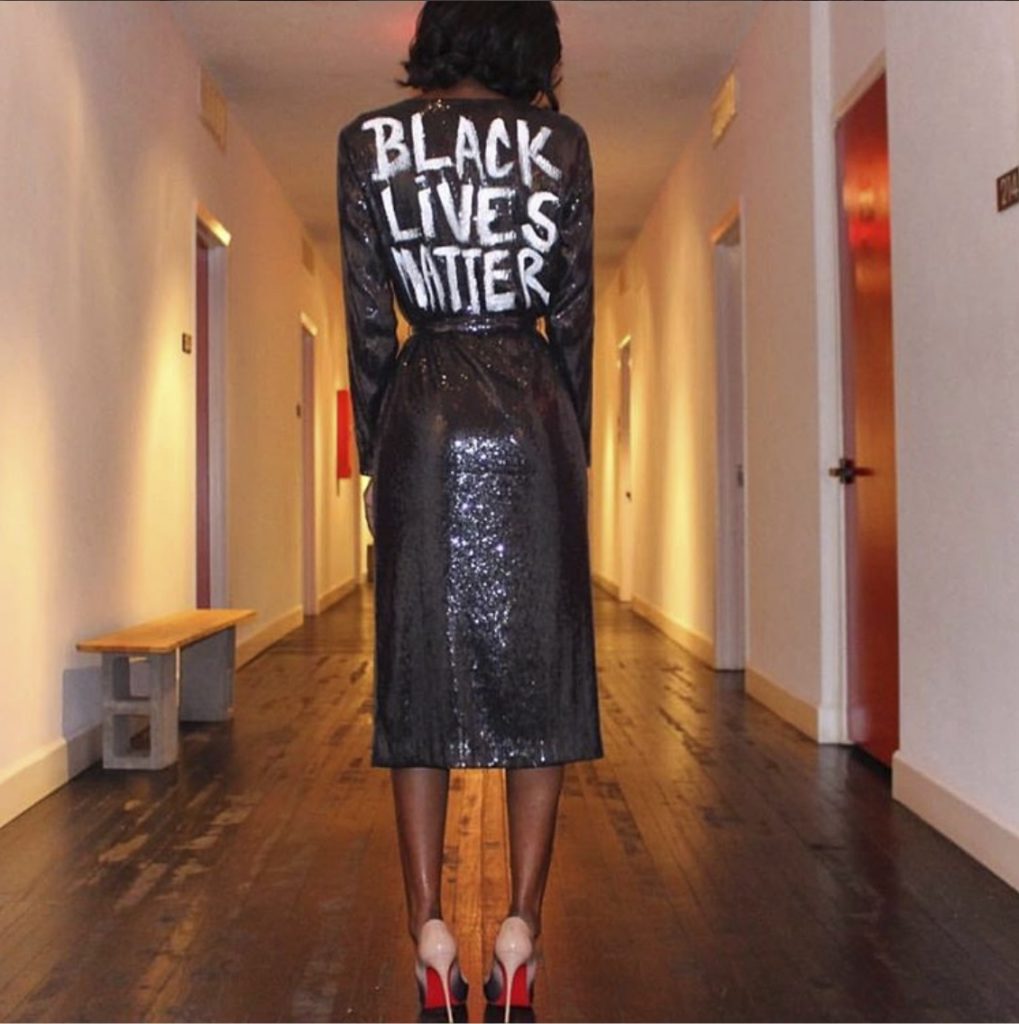 Shayla Janel, along with her team of fashion industry disruptors, has also hit the streets of Houston, New York City, Paris, and a few more places in between. Donning a variety of strong statement-making pieces such as a sequin dress, a hoody, a bomber style jacket and penguin-slim-fitted blazer, the team has been featured in MSN China, Elle Brasil, Women’s Wear Daily, Fashion Bomb Daily, and more.

“For the past four years, I’ve attended Fashion Week. While I never made it into the major shows, I learned quickly by just loitering around the streets that you could potentially capture the attention of the press from all over the world, she said. We were silent but the clothes made a very boisterous statement. The first reaction from people was “Are y’all a singing group?” Then we would turn around and we were greeted with “Yaasssss” left and right—especially from people of color. We were also bombarded by photographers and it was insane for a second. There were a few Caucasian photographers who mocked us and condescendingly shouted out “Black Lives Matter” but overall it was all love!

Slay for a Change launched on 9/11. I wanted to let people know that I will never forget the victims of 9/11. I will also never forget about the deaths of the ones who were killed unjustly. Using #SlayForAChange fashion pieces to amplify her voice, she documented her journey from Texas to New York Fashion Week (NYFW) and produced her very first documentary Fashion Weak with a budget of less than a $1,000. “During filming, we ran into my icon, June Ambrose, who makes an appearance in our documentary. Because June reposted our photo on her Instagram account, Slay For a Change went viral.

#StayWoke: More Than a Hashtag 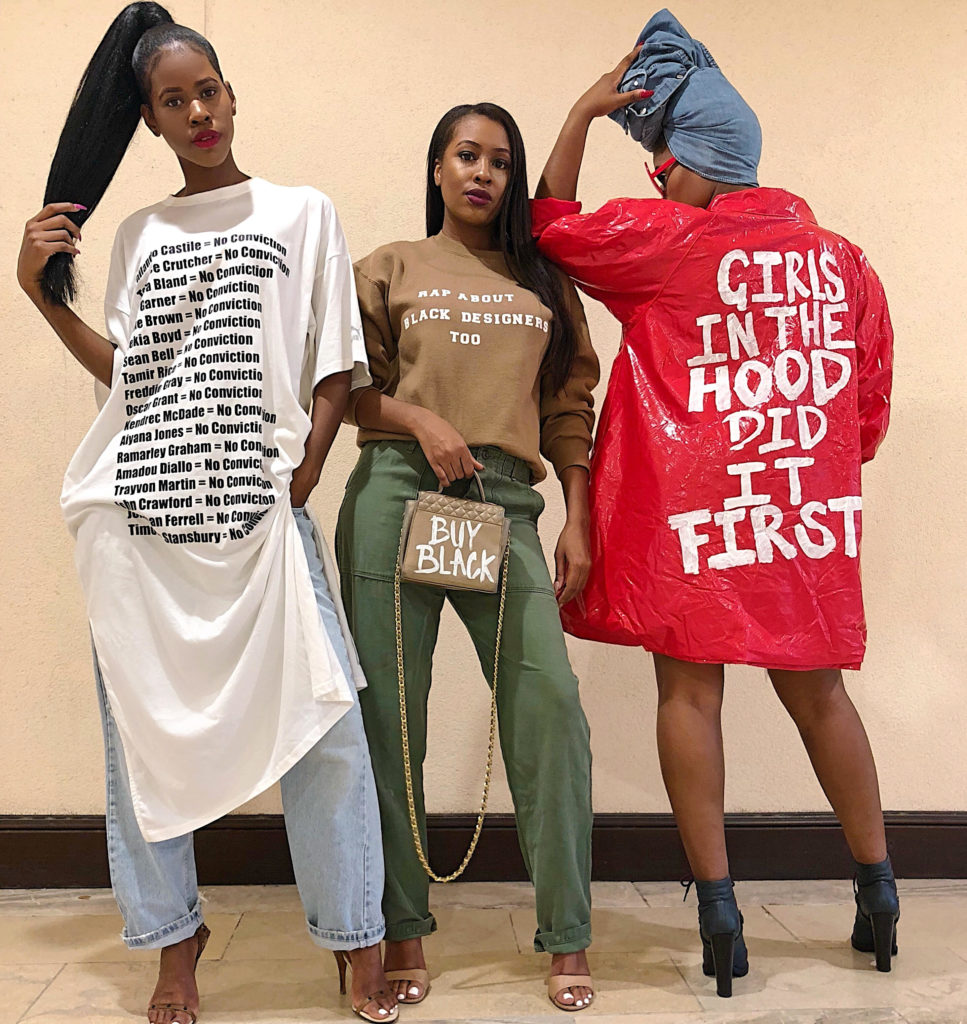 “I chose to use the names of victims of police brutality and injustices because I noticed after the death of Sandra Bland, everyone was up in arms but a month later people moved on, including myself, which is why I didn’t go through with my vision the first time I came up with it,” she said. It’s also important for me to note that Sandra Bland and I are both alumni from Prairie View A&M University. Her death was my official wake up call. Initially, I thought if I could get some pictures taken with Sandra Bland’s name during NYFW,  the media would photograph me and continue to spread awareness. 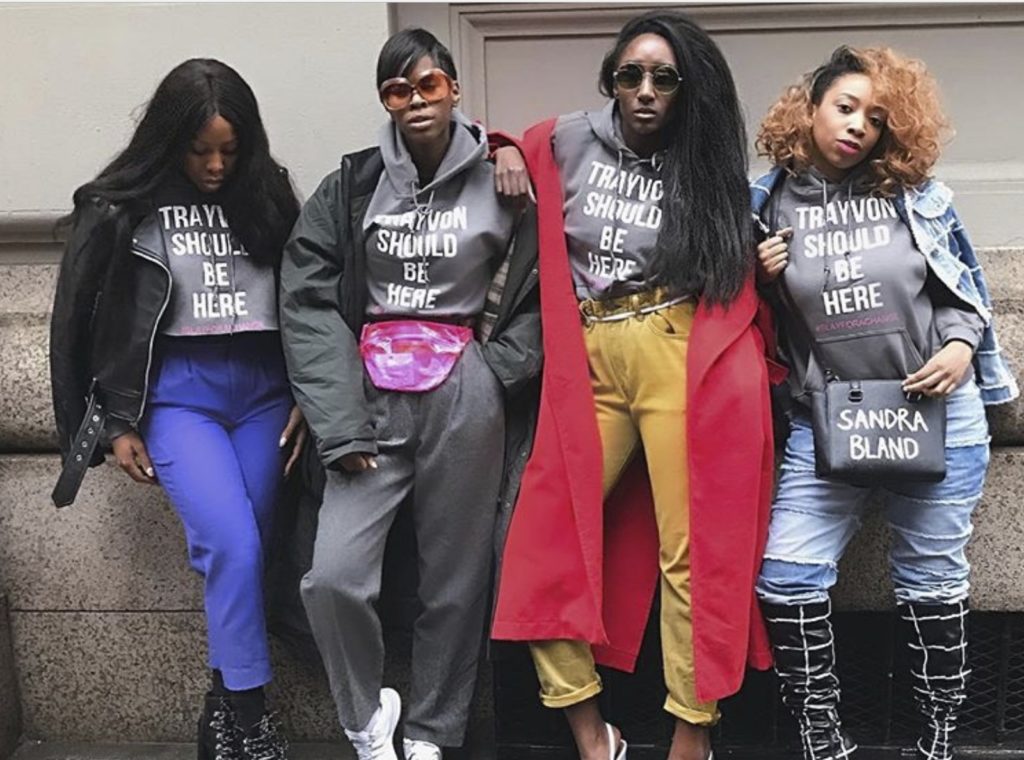 Two years later, the fashion activist has no plans of slowing down. “I’m most proud of my first documentary, Fashion Weak, which was directed by my sister, April Joi. She is also part of the SFAC team. It’s raw and imperfect with a very small budget, but the story is so powerful. It not only follows us throughout NYFW, it tracks my journey through fashion and brings the issue of racism within the Industry to the forefront. With the help of my dream team—Sr. Fashion Editor Kaye Washington; Web Director Chloe Moore, and Senior Editor Gabriella Layne; SlayforaChange.com is a digital safe space where African American millennial women can share their voice through articles and uplift people from all over the world. I’m also proud of my ever-growing business which is an online vintage store called Randomandchic.com.