It’s been more than two and a half years since Hurricane Irma and Maria caused mass devastation in the Caribbean back in September 2017, but the remnants can still be seen throughout the U.S. Virgin Islands. The powerful category 5 hurricanes caused billions of dollars in destruction and left the islands without power, running water, or a reliable food supply for weeks. Today, many businesses are still closed while many homes remain covered with blue tarps in place of roofs.

Nevertheless, that has not stopped some locals from picking up the pieces of their lives affected by the storms. Although the infrastructure of the islands still needs a lot of attention, the spirit, beauty, and resilience of the people remain strong. More and more natives are reopening their stores, starting new businesses, and welcoming visitors to their homeland. After spending five days in St. Thomas and St. Croix, I’d recommend anyone looking to travel this summer to book a trip to the Virgin Islands. Here’s why.

You Don’t Need A Passport

The U.S. Virgin Islands — which consists of the main islands of St. Croix, St. John, and St. Thomas — are known for their white-sand beaches, beautiful coral reefs, and verdant hills. In addition, it may also be one of the most accessible and convenient Caribbean destinations since Americans don’t need a passport in order to visit.

“We’re U.S. Territory, but we’re still very much a Caribbean Island and we definitely have a very authentic feel,” Anquanette Gaspard, the founder of the Virgin Island Food Tours, told BLACK ENTERPRISE. Plus, “We don’t have typical touristy kind of events.”

A Taste of Wakanda

Many of us are still fantasizing about the idea of visiting Wakanda, a fictitious country featured in Marvel’s Black Panther where black folks were never enslaved and lived their best lives since the beginning of time. Well, if you want to experience a taste of a pre-colonial world, then consider paying a visit to St. Croix where Chef Digby Stridiron is helping to bring the fantasy into fruition. Last fall, he opened Braata, a rum bar and West Indian kitchen in Frederiksted that gives patrons a true taste of freedom.

What if “Africans came to the Americas on their own free will, with all of their beauty and their boats, and we just started cooking with the tribes that were [already] here?” said Stridiron, a proud Crucian who moved back to St. Croix after the hurricanes.

The cuisine at his newest eatery reimagines a world where colonialism didn’t exist, and instead of being invaded and colonized, Africans migrated to the land and co-existed peacefully with indigenous tribes. Braata’s menu is inspired by the indigenous tribes that inhabited the Virgin Islands for centuries before they were seized by Spaniards. The biggest influences “come from the Taino, a colonized tribe,” said Stridiron.

Many of the dishes he created include pastillas, red beans, and creole sauce. The menu, which is a creative culinary interpretation of Crucian cuisine from locally sourced farmers, also includes lots of rum and Caribbean-inspired cocktail. Digby added that most meals don’t include creams, bread, or dairy-based products. “All of the heavy pastas, the heavy gluten dishes, and bread with everything – all that stuff is out the door here.”

Meanwhile, Braata’s rustic and timeless ambiance is uplifted by Caribbean music playing in the background. “I wanted it to feel like an old world,” said Digby. “You can feel that vibe from the limewash paint. I did it myself,” he added.

Feeling blessed today as I get ready to open @braatastx today. A little over a year ago I was put into an awkward position. My vision on food revolves around love, integrity and centers itself around sustaining our history and foodways. I remember how it felt. What I learned over time is life isn’t always about achieving the things you want but sometimes it’s about learning what you don’t want and not accepting it. Looking back at the last few months I couldn’t be prouder of my teams at @braatastx and @amacanebay and what we’ve been able to accomplish so far! Thank you to St. Croix for always supporting my goals and allowing me to showcase our culture to the world! What I took from this experience can be summed up by @sizzlakalonjimuzik “you can’t keep a good man down!” Happy Thursday Yal!: @meredithzimmerman_

Digby is one of many natives who took a tragic loss in the aftermath of the hurricanes but remain committed to rebuilding the islands. “Irma changed my life,” he said. “I lost the most important person that I know, my grandma. [She] influenced everything that I did. She’s the reason why I cook.” His grandmother’s death was partly caused by the island’s lack of infrastructure since many of those who lost their homes had a hard time finding safe shelter in the aftermath. “She was elderly and she was being moved around, and through all of that moving around, from spot to spot…she passed.”

Nevertheless, the devastation and the loss of his grandmother has ultimately strengthened Digby’s love for his homeland. “I’m more committed to being here more so than I ever was in the past,” he said. “I don’t want to live anywhere else outside of the Virgin Islands. I want to be with my family every single moment so that I can be here with them so when they need me I can be that person. For my community, I want to be here so that I could be that person.” 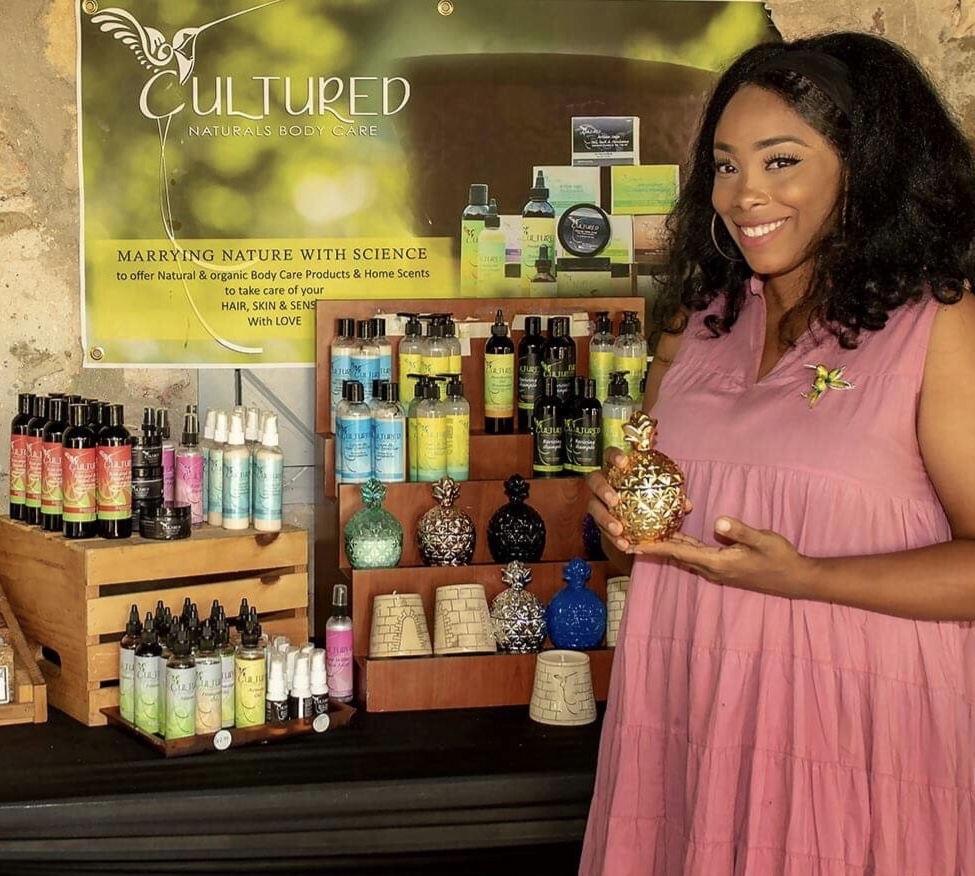 Like many tropical islands in the region, the USVI are economically dependent on tourism — the industry’s continued contribution to GDP relies heavily on high levels of customer service. Fortunately, there are plenty of people and businesses that could use the support, like Ramone Reid. The registered nurse started making skin care products from natural ingredients after being diagnosed with cancer in 2014 and then losing her grandmother to the disease. Eventually, she turned the hobby into a business, launching her own product line called Cultured Naturals Body Care. Her business, however, took a hard hit from Irma. “I had just given up my business because of the physical destruction,” she said. “After the storm, everybody was in survival mode. A lot of people had lost their homes. I was [also] pregnant with my second baby. So it was just self-preservation at that point.”

At the time, she says she remembers thinking, “who would want to get body care products?” However, rather than completely giving up, she relaunched her brand with a new purpose: to serve the needs of her people following the storm.

“When I thought about it, we had an issue with mosquitoes, we had issues with the water and people were having skin issues. So, I decided to do a new twist on the business and create products that were beneficial …  like mosquito repellents and repellant candles. Products that helped with breakouts and itching from the water issues.”

In September, she took a leap of faith to expand her business by opening a store on Christiansted street.

“The Culinary Gateway to the Caribbean”


Anquanette Gaspard says she was inspired to launch a food tour company in St. Croix after traveling the world and realizing that the food in her homeland doesn’t compare to anyplace else. “I realized that St. Croix’s food culture has always been rich in comparison to the other Virgin Islands throughout the Caribbean. We’re considered to be the culinary gateway to the Caribbean, if you will, because you can get Dominican food, Dominiquican food, Antiguan, Trinidad. And then we also have our own local cuisine,” she said. In addition to giving tourists a taste of the Twin City, the Virgin Island Food Tours also preserves the history and culture of the island.

The Beauty of the Islands 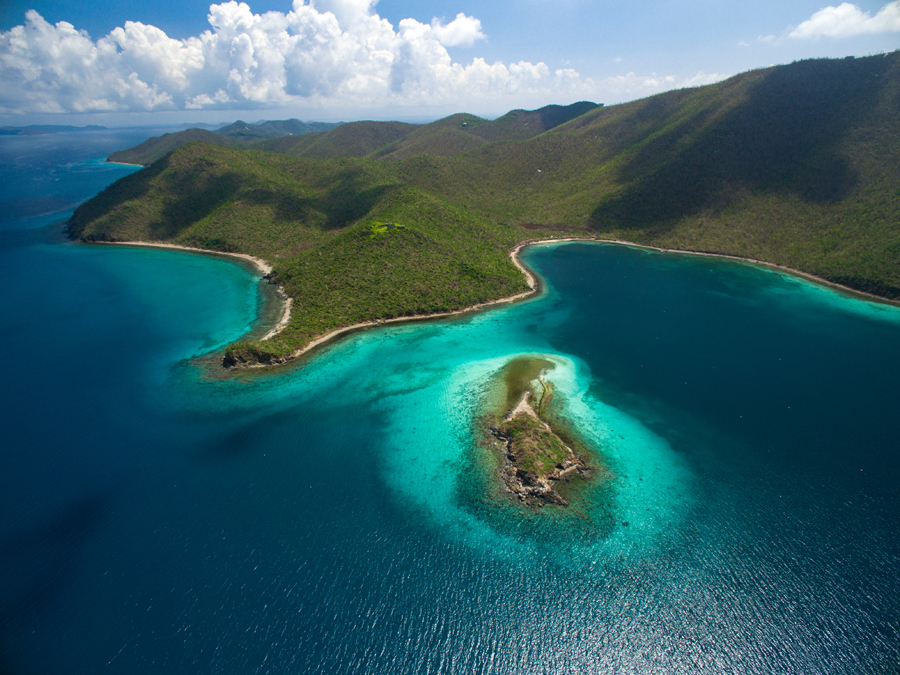 Reid encourages people to visit the USVI to experience its beauty and glow first hand. “We offer a warmth and a love and we have rich talent and skills and services that we can still offer,” she said.

Stridion agrees. “Why should you come to St. Croix? It’s part of American culture [and] it’s beautiful,” he said. “The people are so vibrant,” he added.  “It’s the people, it’s the culture, it’s the vibes, it’s beautiful, it’s beaches. We offer so much.”

Gaspard, however, said the Virgin Islands can’t be summed up in words. “You have to feel St. Croix. It’s hard for me to describe it. It is definitely more of a feeling.”