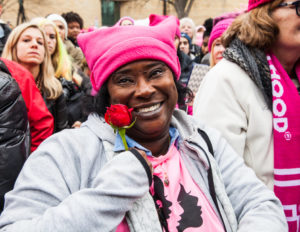 On Jan. 21, 2017, the largest single-day protest took place in U.S. history at the Women’s March. The momentum and energy from that event was an experience of a lifetime. Lives were changed and many women went back to their communities to continue the efforts for change.

During the weekend of Oct. 27–29 in Detroit, over 5,000 attendees came together at the Cobo Center for the first-of-its-kind Women’s Convention in 40 years. The inaugural event brought together thousands of first-time activists, women who’ve organized locally and nationally, students, movement leaders, politicians, and more. Attendees were from Los Angeles, New York, D.C., Chicago, Florida, Oklahoma, and more.

The theme of the convention was “Reclaiming Our Time,” this was in honor of Congresswoman Maxine Waters’ viral phrase “reclaiming my time.” The event had over 170 workshops and 400 speakers and panelists. Attendees had the opportunity to learn about wellness as it relates to activism, fighting for gender equality, how to plan a rally in less than 24 hours, strategies on building a new vision for safety to overcome mass incarnation, strategies for organizing in schools and communities for youth, and combating sexual violence within the community.

One of the most popular sessions was “Confronting White Womanhood,” which led organizers to create a repeat session on Saturday due to the overwhelming demand. The convention also included a Social Justice Concert with Melanie Fiona, Alice Smith, BombaRica, V. Bozeman, Jessica Care Moore, and more.

From the moment the convention started, the energy was infectious and electric. The opening remarks included speeches from Women’s March co-Chairs Tamika Mallory and Linda Sarsour; Tarana Burke; the original founder of the #MeToo campaign; actress Rose McGowan; activist Rosa Clemente; and more. That set the momentum that would run throughout the weekend. After a full day of sessions, Friday night remarks included Congresswoman Brenda Lawrence, Sen. Debbie Stabenow of Michigan, Sen. Kirsten Gillibrand of New York, and Sen. Amy Klobuchar of Minnesota.

Maxine Waters: “Creep, Get Off My Back!”

On Saturday, Congresswoman Maxine Waters was honored and gave a speech that spoke to sexual harassment, sharing that the issue is beyond Hollywood. She also warned those who are trying to divide the women’s resistance movement to “go to hell.” She started the catchphrase “reclaiming my time.” Another one that will surface soon, is “creep, get off my back.” This came as Waters was telling the attendees about Trump walking near Democratic presidential candidate Hillary Clinton in an intrusive and intimidating manner during a 2016 debate. “Hillary should have said: ‘Creep, get off my back!’” Waters said. Wrapping up the speech Waters had the crowd on their feet cheering and chanting “Impeach 45.”

As the weekend came to a close, a very important question was answered during the final discussion “Where Do We Go From Here?” The panel was moderated by Mallory. Panelists were Angela Rye, Carmen Perez, Bob Bland, and Donnell R. White. The speakers encouraged attendees to go local when it comes to creating change. Rye referenced Martin Luther King’s 1967 speech Where Do We Go From Here and broke it down into three prongs. She advised the crowd to, “bank black, give black, and buy black.” She continued to share that “black women are the largest group of entrepreneurs” and encouraged attendees to support black-owned businesses.

Where do we go from here is a loaded question, but the people who attended the Women’s Convention are up for the challenge. Many left feeling a bittersweet emotion, clarity, rejuvenated, and ready to take action. Although there is much work to be done, this event was a strong follow up from the march.