Comedy wasn’t the only thing taking center stage during the premiere of Kevin Hart’s new movie, Night School. The star, and members of the all-star team behind the film, kicked off the 22nd Urbanworld Film Festival with messages about the importance of continuing the push for diversity in Hollywood.

“This is yet another labor of love that is produced, directed, written, and starring folks that look just like you and me and I’m very proud,” producer Will Packer said as he introduced the film.

“I’m so honored to be here. I’m somebody that has been supported by festivals like this and people like you. You’re my peers, you are the next generation of filmmakers that are coming up,” Packer said to the audience packing the SVA Theater on opening night of the festival.

“I win because you win; when you win, I win. I want to thank you so much for being here, for being in the room. If we’re not in the room, we can’t influence what happens and help take things to the next level.”

The importance of black film festivals to the careers of black filmmakers and to the effort to advance diversity in Hollywood was underscored by the movie’s director, Malcolm Lee. It was a homecoming of sorts for Lee, who got his start at Urbanworld almost two decades ago.

“Nineteen years ago at this festival I launched my first movie, The Best Man,” Lee said. “And it was the word of mouth of this festival that propelled us to a No. 1 ranking at the box office—a whopping $9 million. That’s what was success back in 1999.”

Packer and Lee were joined onstage by some of the Night School cast: comedian Tiffany Haddish, rapper Fat Joe, and Hart, who produced, wrote, and stars in the film.

“As he told you this is our seventh movie,” the star said of frequent collaborator Packer. “We’ve had a lot of success together. Four number ones, two number twos. We’re hoping to have another No. 1.” 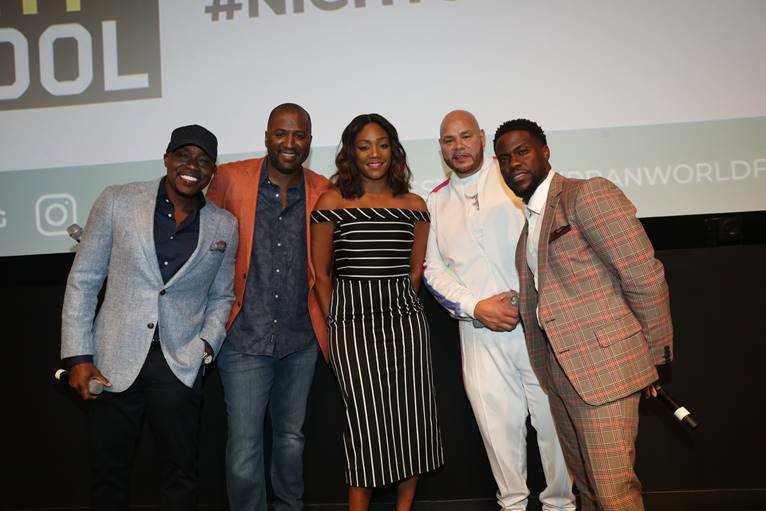 Hart also gave credit to Lee, a “new addition to my entertainment career, but a very valuable one,” calling him “an amazing director, a guy who understands comedy at a very high level and understands an ensemble cast and brings the best out of everybody.”

Haddish not only received praise from her co-star, but a standing ovation from the crowd. “I’m very fortunate to get this woman in this movie, especially when we got her—as the star continues to rise. I just want to take time to celebrate this woman the way she should be celebrated because success is earned, it’s not given. And the opportunities that she now has have been earned.”

“I know where you came from and I know the work that you put into your craft and I know what you have coming,” Hart told Haddish, congratulating her on her recent Emmy award.

But Hart saved his most passionate commentary for last, as he spoke of the work that’s being done to solve the problem of diversity in Hollywood.

“When you see people in a position where they’re winning, and they’re one of us, celebrate those people and don’t choose to tear them down, because you become a part of the problem,” Hart continued. “Celebrate us when we see us winning. We can’t win as people if we don’t allow us to open up the doors for more of us. It’s that simple.”

Haddish, with her perfect comedic timing, then chimed in to add “And if you ain’t got nothing nice to say, don’t say nothing at all.”

For more on the premiere, check out Urbanworld’s video recap: