In a room packed with nearly 1,500 black women, Sen. Kamala Harris took the stage at the 2019 Women of Power Summit, opening up about her multicultural upbringing, run for president, and black girl magic during a fireside chat with media personality Star Jones. The Democratic senator walked out with a wide radiant smile and was greeted by a warm and excited audience as Shanice’s 1991 hit “I Love Your your Smile” befittingly played in the background.

During her session, which took place Friday morning at The Mirage in Las Vegas, Harris described herself as a “joyful warrior” and talked about her plan to reform the country should she win the White House next year. The underlying tone of her message was optimistic, yet realistic about the harsh realities the country faces. The two-term senator also kept it real about what it means to be a black woman.

Here are nine sistergirl moments Harris shared at the conference. 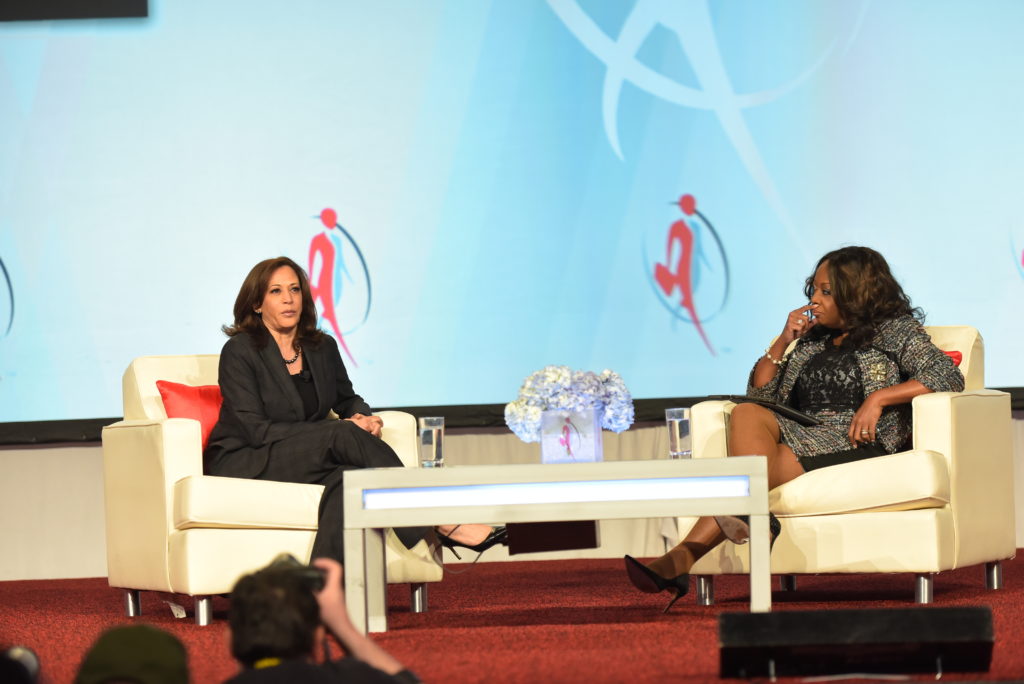 An Ode To Howard University

Harris, who launched her presidential campaign on Dr. Martin Luther King Day, credited her success to two things: her family and education at Howard University.

“You’re in an environment that … tells you that you can be great and you will be given the resources and the expectation to achieve that, and the only thing standing in the way of your success will be you,” she said of her alma mater. “It teaches you as a young black woman or man that you don’t have to be limited by other people’s perceptions of who you are, that you come from great people, [and] stand on shoulders of those who came before us.”

The Power of Sisterhood

The California official talked about the support she gets as a member of Alpha Kappa Alpha Sorority, Inc. and recently seeing so many of her sorors during her visit to Howard University last week. That prompted the sorors in the room to erupt with skee-wees and raise their pinkies high.

“There is great power that comes with the sisterhood,” said Harris. “The word support undervalues the significance of it, but it is the thing that keeps you going. I would not have been able to accomplish what I have in my career and in my life without my actual sister and my chosen sisters. There is no way I’d be where I am today.”

Like many black women, Harris has been underrated and her competence has been questioned. “There have been moments where throughout my career people underestimated my ability to get something done,” she said.

Harris, who became the first black woman to serve as Attorney General in California and the second black woman to be elected as a U.S. Senator, added that people have also doubted her ability to win an elected office. “I’ve had the setback of attempting to run for office that nobody thought that we could win and all that comes with that.”

However, she used negative perceptions of herself as a source of motivation. “Good, underestimate me. I can work with that,” she said with defiance.

When asked about the criticism she has received about her record as a prosecutor in California, Harris said, “it’s a matter of mischaracterizing the purpose and the goal and the role.”

The former Attorney General was also candid about the scrutiny she faced from her family when she first decided to become a prosecutor. “My family looked at me like I was crazy,” she admitted. “With some of them, I had to defend the decision like one would a thesis.”

Nevertheless, she says she purposely ran for the position so she could reform the system from the inside. “I said ‘there has to be a role for us in the inside of the room where the decisions are made.’” For example, she pointed to the reentry program she created in 2004 as a District Attorney to help young men arrested for drug sales. Through the initiative, first-time non-violent offenders could have their records cleared if they obtained a GED, steady employment, took parenting classes, and passed drug tests.

Despite her intentions, Harris says she expects people to continue to slam her record. “People are going to say, ‘Kamala was popo,’” she laughed. “Somebody gotta be popo because there are some victims, and we do need to advocate for the victims,” added Jones — a former prosecutor, herself.

Being Misunderstood as a Black Woman

Harris knows firsthand how it feels to be misunderstood. A lot needs to be done so the world can understand “who black women are and understand the breadth and depth of who we are,” she said. She added, “there are so many who are unclear about it because they have not chosen to inform themselves.” However, to overcome the stigmas and stereotypes attached to black womanhood, Harris encouraged black women to not let other people’s expectation define them.

When asked when she first recognized her own ‘Black Girl Magic,’ Harris said she feels it most when it’s reflected in other black women around her.

“When I see you, I feel it,” Harris told Jones. “When we see it in each other, I think that that’s when we see it. It’s not about one as an individual; it’s about us as a collective.”

Jones followed up asking Harris who would she use her ‘Black Girl Magic’ to make disappear. After a long pause, Harris finally answered, saying she would use it to eradicate poverty.

Black women know best the impact that “isms” have on disenfranchised communities. They are a constant and dreadful reminder of the systemic obstacles they face every single day. However, for far too long, society has tried to hide and downplay these institutionalized barriers.

Harris announced that she hired a black woman to be the state director for her campaign in Iowa where the black population is a mere 3.2%. Nonetheless, Harris has confidence in her state director’s ability to organize residents on her behalf. “If you look at her skill set, and her experience, and her talent, and all that she contributes, she is one of the strongest state directors anyone will ever have in Iowa,” said Harris.

Harris talked about standing on the shoulders of Shirley Chisholm, who became the first black woman to run for president in a major party in 1972: “I am inspired by her every day,” she said.