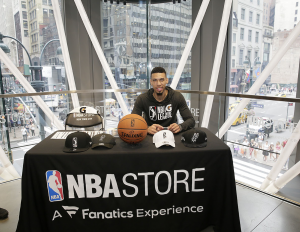 Spurs sharp-shooter Danny Green is from Long Island, so in the offseason it’s not odd to see him at various places around New York city, signing autographs and taking pictures with fans. Green made an appearance on Wednesday at Manhattan’s NBA 5th Avenue Store, which also hosted former G-League players Chasson Randle and Joe Harris on Monday. 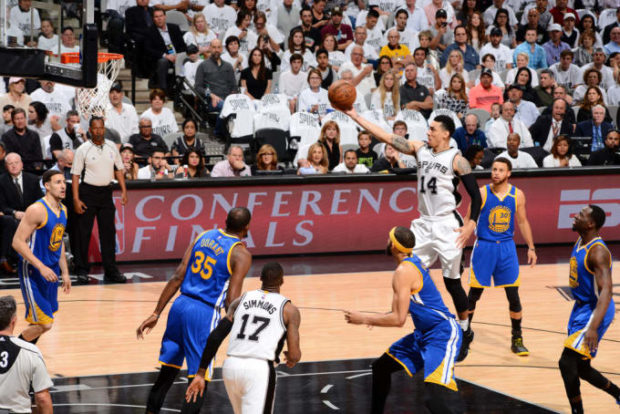 (Image: Courtesy of the NBA)

According to statistics being spouted from the store’s surround sound PA system, 44 % of NBA players have D-League/G-League experience and 100 of the players in last season’s NBA playoffs got that next level polishing there.

Green is a G League product. He was drafted by the Cleveland Cavs in the second round of the 2009 NBA Draft after winning a National Championship at the University of North Carolina.

The four-year player was waived by Cleveland (who undoubtedly regrets that decision now) and embarked on a D League/G League journey that led him to stints with the Erie BayHawks, Reno Bighorns and Austin Toros.

Green even played in Slovenia until his game was ripe for the pickings and he caught on with the Spurs in 2011, eventually finding his niche as the super clutch, trey-draining, defensive stopper on the 2014 championship Spurs team and being blessed with the $40 million contract he currently enjoys.

The Shadow League got a chance to speak with the NBA champion about his G League experience, playing with Tim Duncan and for Gregg Popovich – two legends of their respective crafts – and how a team-oriented, perennial playoff machine like the Spurs will handle the proliferation of Super Teams forming throughout the league.

How did your G-League experience prepare you for life in the NBA and help you stick with the Spurs once you got a real opportunity?

“I think It was a very big part of me becoming the type of player that Pop wanted me to be. He thought I was a good player. He thought I was talented, but he didn’t think I had an edge. I think the D-League is that experience that gives a lot of guys the edge, especially myself. You kind of play with more of a chip on your shoulder to prove people wrong, especially the critics. Looking back, that experience was a lot of fun and helped me grow as a player and mature. I became more aggressive and expanded my game a little more. It gave me an edge.”

Did staying four years in college initially hurt you as an NBA prospect?

“I don’t think so. I actually think it helps some guys if they stay an extra year or two. For me, I didn’t have much of a choice. I wasn’t a highly rated prospect coming out of high school. Regardless of what year I left it would probably have been the same outcome for me. It was good for me to get a degree and finish school. I always wanted to graduate from college so I made sure I did that. I tested the waters in my junior year to see what it would be like and I went back to school and ended on a pretty good note, so I was lucky enough to win a National Title before I left.”

Tell us something about Tim Duncan that we might not know?

“I always tell people he’s probably the greatest teammate I ever played with. He encouraged us as if we were the greatest power forward of all time, when he really was. He was a great passer and defender and underrated in those aspects of the game.

Not many things people don’t know about him. If you research him it tells you all of his hobbies and what he likes to do. He’s big into boxing and now he’s doing kickboxing and all types of martial arts stuff. He’s very much into cars. He had a car shop in San Antonio. In San Antonio everyone owns weapons and guns so people go to the gun range. He was big on that. We’d be doing paintball and stuff like that. He’s into a million things and in San Antonio you are able to do all of those things. ” 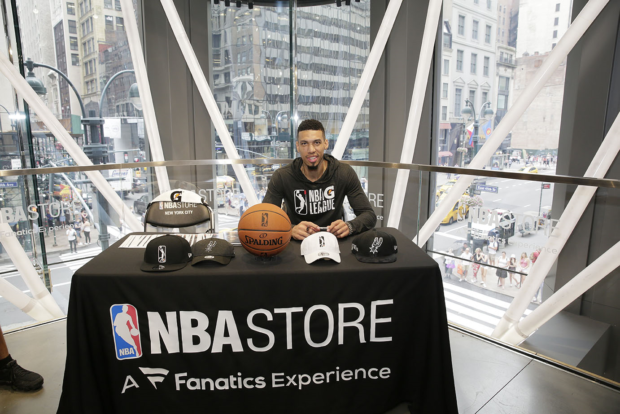 (Image: Courtesy of the NBA)

Tell us an anecdote or something about coach Gregg Popovich.

“He’s a real laid back guy. He’s a softie at heart. He’s like a grandpa and he’s like that towards all of us. On the court he’s intense, but off of it he’s always cracking jokes. He’s really funny. He’s a stand-up comedian. It’s hard not to laugh around Pop. You have to have a sense of humor to play for the guy, but you definitely have to know when to get ready for business.

His biggest jokes surround us getting hurt. Any time we get hurt, he has a joke like, ‘What are we paying you for? Are we paying you to lay on a table?’ He’ll especially crack jokes on the younger players. When he sees them on the table getting massages and stuff like that, Pop says, ‘You guys are soft these days. Everybody wants massages.’

He also messes with guys by acting like he doesn’t know anybody’s name when they come to training camp. He’ll say, ‘What’s your name again?’ Me being from Carolina, any drill or whatever it was I was doing… he’d sarcastically ask me, ‘What did (UNC coach) Roy (Williams) teach you?..I know he taught you better than that.”

What’s your reaction to the trend towards Super Teams forming and how the Spurs will attack this new phenomenon?

“Certain teams have gravitated towards that. I’m not a big fan of it, but people are trying to beat the champions Golden State, and they have a ‘Super Team’ as you call it, so people feel like the only way to beat them is to do the same thing. If I had to guess, R.C. (Buford) and Pop can find other ways to do it and find some pieces that can play team basketball and play good defense to stop the Super Teams. Obviously you need to have talent, but I don’t think we need a Super Team. Just a good team. Some good players who can fall in line and have good chemistry. That’s the biggest thing.

This article originally posted at The Shadow League