The private dinner was held in New York City at The James Beard Foundation, a nonprofit culinary arts organization named in honor of prolific food writer and cookbook author James Beard, a.k.a. the “Dean of American Cookery.” It was dedicated to the observance of the Juneteenth Independence Day, a nationally recognized holiday that marked the end of slavery for African Americans in Texas and other parts of the South on June 19, 1865. Although slaves were legally free after President Abraham Lincoln issued the Emancipation Proclamation in 1863, it took two years before the news traveled to all parts of the country. As a result, African American slaves were still working on plantations as late as 1865, while 250,000 people were still enslaved in Texas until Union soldiers traveled to Galveston, Texas, to announce that all enslaved people were free.

At the dinner, the chefs presented a collaborative menu inspired by black southern cuisine and their own roots. In addition to paying homage to his ancestors, Chef Chris Scott said the event allowed him to tell “a story of our people through food.” Some of the dishes he made included hoecakes, which date back to the 18th century, and scrabble, a dish that his grandmother used to make consisting of hog offal. However, it was his famous honey butter biscuits that won the night. “In a million years, my grandmother would have never thought that her biscuits would be served at the Beard House on this kind of night,” he told guests following the dinner.

“A lot of chefs are turning back to their roots, especially black folks,” Scott told Black Enterprise in an interview. “All of us are classically trained in French style, Spanish cuisine, and a lot of European cooking methods, but now we’ve come to a point where we’re turning the curve and we’re coming back home, cooking the food of our ancestors, cooking the food that we grew up on.”

Chef Adrienne Cheatham told BE that cooking Juneteenth-inspired dishes at the prestigious James Beard House was an honor that affirms that soul food deserves the same recognition as other acclaimed fares around the world. “James Beard House is acknowledging Juneteenth. That’s a holiday that has been big among black people for years, but it’s never been recognized by a major institution,” said the Top Chef season 15 runner-up.

Chef Brother Luck, the owner of Four By Brother Luck in Colorado, called the Juneteenth dinner a celebration of diversity. “As someone who’s worked my way up from the bottom, it’s really special to be here tonight.” He also touched on his own Cajun and Creole heritage, saying, “If you look at southern cuisine and Cajun and Creole soul food, it was about making the best of what you had and adapting.”

Check out the Juneteenth dishes in the slideshow below. 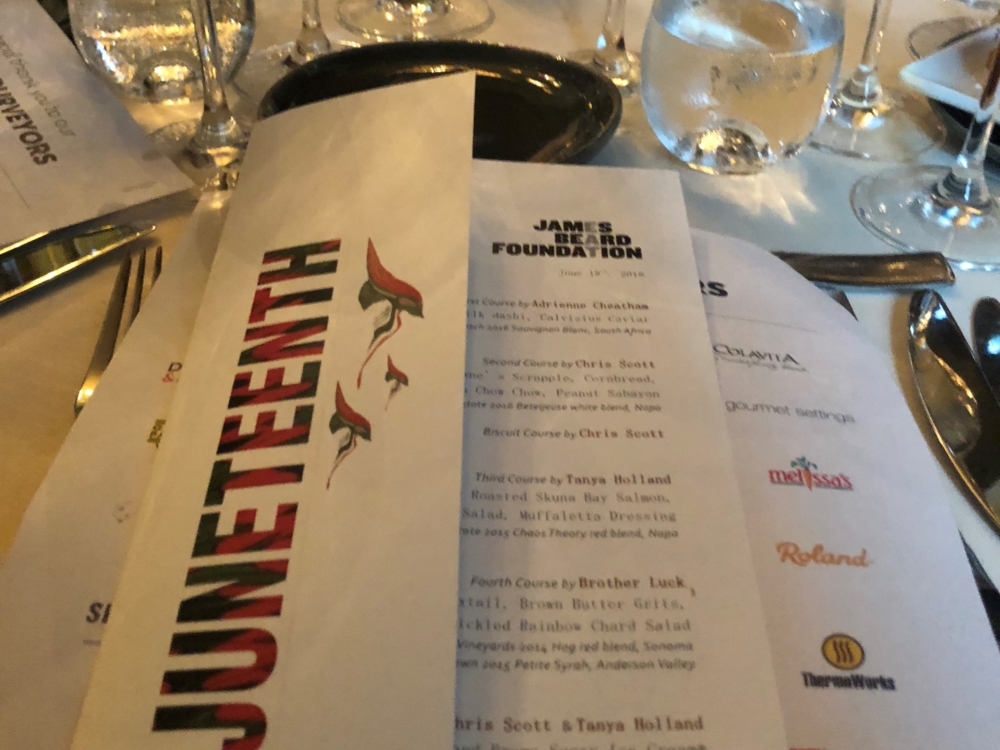