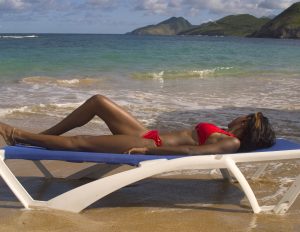 We have all witnessed the poignant images of death and destruction wrought by one of the most devastating hurricane seasons on record—and it may not be over. A number of Caribbean island nations, including Puerto Rico, Dominica, and Barbuda are still reeling from the ruin left in their wake. According to Insurance Journal, losses in the Caribbean are estimated to be between $40 billion to $85 billion from Hurricane Maria alone. Moreover, as tourism season nears, CNN.com revealed a Caribbean Development Bank report that a 1% drop in tourism translates into $138 million loss for the region.

Rallying support for these crippled countries has been a major focus for Dionisio D’Aguilar, who assumed the positions of Bahamas Minister of Tourism and Aviation and chairman of the Caribbean Tourism Organization less than six months ago. At the same time, D’Aguilar, who ran successful Bahamian businesses before his cabinet-level appointment, has been on a mission; communicate that the Bahamas, along with much of the Caribbean, continues to represent vibrant venues for tourism and business opportunities. 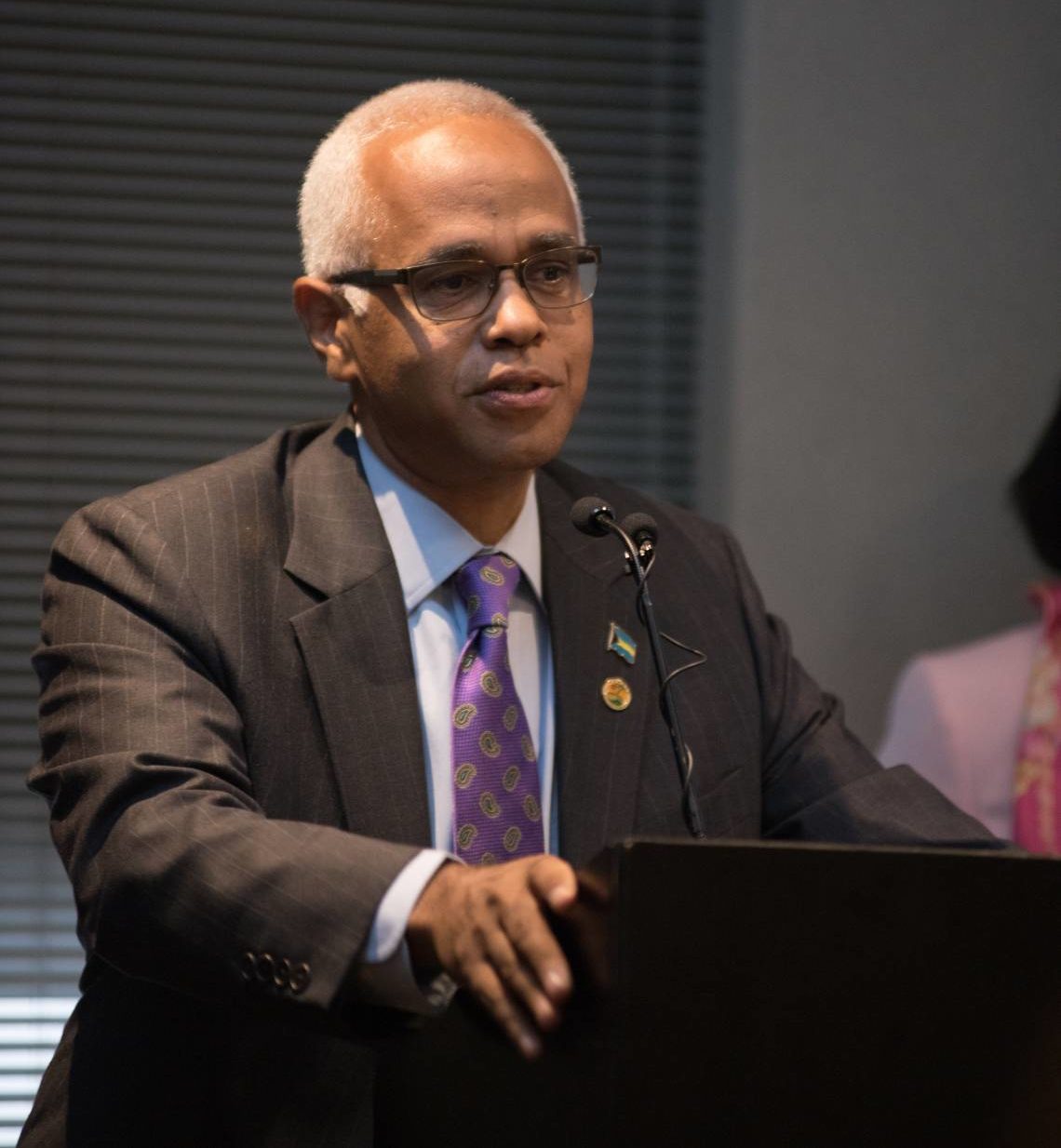 In his role for the Bahamas, he has mapped out a strategic plan that calls for expanding the base of 1.5 million stopover visitors who spend $1,300 per person on average versus 4.7 million cruise passengers who spend a mere $69 per person in one of the Caribbean’s hottest destinations. To achieve that mandate, D’Aguilar seeks growth through a substantial increase in hotel stays with “major new touristic development.” He’s also entering into negotiations with five nations—Turks and Caicos, Haiti, the Dominican Republic, Cuba and the U.S.—to gain control of Bahamian airspace, the only Caribbean country without such air rights.

Successful execution of these initiatives, D’Aguilar asserts, will be a significant economic boost and lead to the creation of myriad business opportunities for both Bahamians and African Americans.

When I recently met with D’Aguilar in Washington, D.C., he had connected with such groups as the National Association of Black Hotel Owners, Operators & Developers (NABHOOD) to review hotel ownership opportunities for African Americans as a means to advance his agenda. 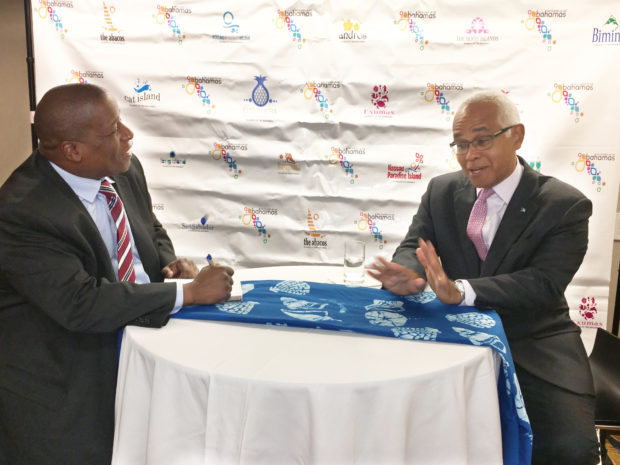 During our 20-minute session, I discussed with him the impact of hurricane activity on the Bahamas and other Caribbean nations, the continued effects of global warming and his agenda for bolstering tourism and driving business development within his country. Here are excerpts from that conversation:

How challenging has it been to maintain tourism in the aftermath of the series of devastating hurricanes that have hit the Caribbean?

My responsibility as minister of tourism is to let the world know that very little happened to the Bahamas in terms of hurricane damage and that the country is very much open for business. A lot of people come to the Bahamas, come to Nassau and think that’s it. When you drill down into the Bahamas, it covers 100,000 square miles. We have 700 islands. 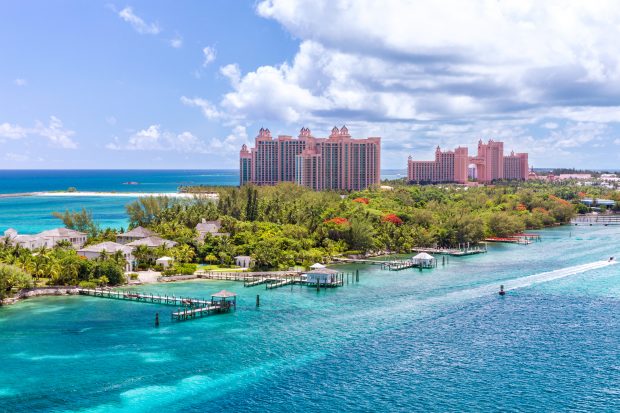 You’ve got to be mindful of the fact that I’m also chairman of the Caribbean Tourist Organization, which represents all of the countries in the Caribbean. People tend to think that the whole Caribbean has been destroyed. But actually, 70% of the Caribbean was unaffected. A number of countries have been severely impacted. In St. Martin, on the Dutch side, 95% of the homes have been affected and their entire touristic offerings have been wiped out. It’s going to take some time for them to rebuild. So, it seems inappropriate to benefit from the hardship that’s being caused by some of our Caribbean brothers and sisters. It’s a challenge for them and the other countries of the Caribbean must be mindful to assist where possible. What I like to tell people is, “Continue to travel to the Caribbean. Today, it’s them. Tomorrow, it could be us.”

What have been lessons learned in how to prepare for natural disasters as well as recovery and rebuilding?

There’s always lessons to learn. If you look at the aftermath of Hurricane Andrew that hit South Florida in 1992, [government officials] completely revamped building codes and one hopes that you look at where and how you build.

Unfortunately, the Caribbean region is going to continue to be the product of global warming. We always complain that we contribute so little to global warming but yet we bear the brunt of its effects in terms of sea level rise. Hurricane Irma had wind gusts, at some stage, at 225 miles an hour, unprecedented in the history of Atlantic storms. How do you build for that? It is such a monumental event that when you rebuild, you can improve codes, set infrastructure requirements and create opportunities for construction. So it does provide opportunity. Out of bad, always comes good. 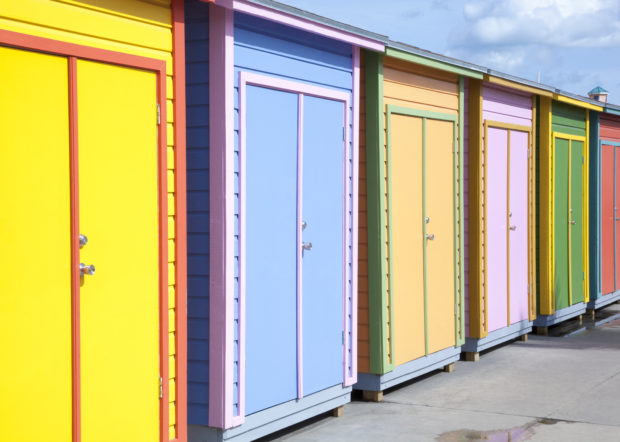 Roughly 85,000 to 90,000 African Americans come to the Bahamas each year. We’re hoping to grow that 15% this year to top the 100,000 mark. The African American market is an exploding component of the travel market. We definitely want to tap into that.

So which groups have you been most successful in attracting to the Bahamas?

[We have found opportunities in religious tourism]. There’s a significant number of African American religious leaders that head major conferences in the United States. They are our greatest ambassadors in getting large church groups to come here. Sometimes the conferences are too large—40,000 to 50,000 people—and we just can’t accommodate them.

Are you aggressively pursuing the millennial market segment?

So we have Atlantis, our major hotel product on New Providence. Atlantis does a superb job catering to families with slides, fun parks, and aquatic features. Baha Mar, this huge 2,300-room development was built to focus on the millennials—the double income, no kids group—looking for that getaway without the distractions of family. It has the largest casino in the Caribbean at 100,000 square feet. There are other hotel products: the Grand Hyatt, the SLS, and the Rosewood.

What we’re also seeing that’s growing exponentially is the whole Airbnb concept. This is an interesting way by which Bahamians and African Americans can enter the hotel sector.

Are there other means of increasing black ownership of hotel properties within the Bahamas?

Definitely a goal of my ministry is to grow the number of hotel rooms on the island and preferably with African American ownership. I think they would be well-suited in that area and in our country. They would understand the dynamic cultural nuances of our people.

I haven’t had those discussions [with hotel chains like the Marriott] yet but [NABHOOD President and CEO] Andy Ingraham and I work very closely together. We’re identifying opportunities and locations. He’s connected with potential investors.

Do you envision business opportunities for African Americans on the aviation front?

My goal is for the Bahamas to take control of our airspace and improve the condition of our airports to drive [tourism] to these different islands. We have a need for enormous amounts of airports, which will require substantial investments. Every airport costs $20 million to $30 million to build.

I don’t think we’ve been as innovative as we can be. There’s a belief that the government should build everything. I’m into less government. So in order to develop them as quickly as possible, we’re going to have to engage in public/private partnerships to get that done. This thereby creates lots of opportunities for African American companies to build, design, and operate.