Genealogical website Ancestry.com, has released 94 new and updated communities so that African Americans and Afro-Caribbeans can learn more about their roots.

Communities are part of the AncestryDNA test, which lets people from the African diaspora explore their heritage and how their ancestors migrated.

One of the new communities focuses on Alabama, Georgia, and South Carolina African Americans. As per Ancestry:

“Members with this community may have ancestors that were enslaved and working on rice plantations in South Carolina and Georgia. When cotton fields came to the area in the late 1700s, many enslaved African Americans were brought to work those fields. Following the Civil War, the Great Depression, and World War II, many South Carolinians followed rail lines up North to New York and Philadelphia. This group was one of many communities that were part of the Great Migration–which was the movement of millions of African Americans during the 1900s from the South to cities in the North and West.” 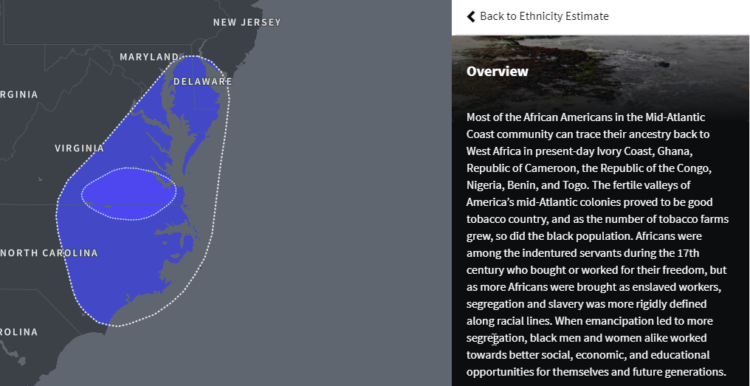 Another new AncestryDNA community centers on Louisiana Creoles and African Americans. Interestingly, Ancestry’s research finds that by 1940 more than 18% of African Americans in the Bay Area were from Louisiana.

Also expanded, are Caribbean communities, with historical information for those from Haiti, Jamaica, the Bahamas, and more. Here is an interesting tidbit from Ancestry research, “Afro-Caribbeans who moved to New York sometimes had difficulty adjusting to their new homes but by 1930 about one-third of New York’s black professionals, such as lawyers and doctors, were African Caribbeans.”

The update also has visuals and a timeline showing the migration of people from the African diaspora including a visual depicting the Great Migration—a mass exodus of African Americans fleeing the racism of the South to areas in the Northern and Western United States.

The company says the new data is based on its proprietary Genetic Communities technology. “With just the results of an AncestryDNA test, we can help unlock stories of the people and places that make up our customer’s recent family histories. These new insights, provided using our unique Genetic Communities technology, can reveal the roles and unique impact our customer’s ancestors played in history,” the company stated in a press release.

Ancestry.com faced criticism last year after a black customer discovered that his enslaved ancestors were referred to as “migrants” in his DNA search results.

“When zooming in on our African lineage from nations like Benin and the Ivory Coast, Ancestry.com suggested that our ancestors had arrived in the South during the ‘migration’ of the past few hundred years,” he wrote in a petition against the company.

Andrew M. says he was “shocked and offended” to read Ancestry’s characterization of his family history. “Migration implies choice,” he explained, and “that is most certainly not what happened to my African ancestors who came here in the hull of a ship like chattel only to be sold into slavery when they arrived.”

Ancestry.com issued an apology at the time. “We apologize for the language used on our website to describe the historic movements of people from one place to another,” said Nat Natarajan, Ancestry executive vice president of Product and Technology at the time. “We understand that not all of the movements of people through history—including Africans brought as slaves to the United States—were made voluntarily. We will make changes to ensure the language on our site more accurately describes these events in history.” The company also changed the language it used in reference to enslaved people on its site.

The post Ancestry.com Releases New Data For Those From the African Diaspora to Unearth More About Their Lineage appeared first on Black Enterprise.