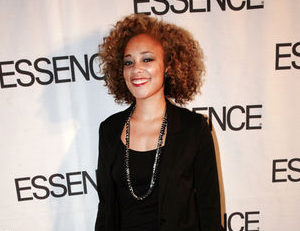 By now, many of us have reveled in watching Caitlyn Jenner getting schooled on her privilege by Amanda Seales, a comedian, actress, and a star on HBO’s Insecure. Both Seales and Jenner were attending Katy Perry’s “Friends and Family: Dinner With Discourse” party when things took an unexpected turn.

In a video clip that has since gone viral, Seales is seen explaining why she has had such a different experience in America as a black woman as compared to Jenner, a wealthy and celebrated transgender woman.

“The reason I am so passionate—and I’m not hostile, I’m passionate—the reason I am so passionate is because I’ve had such a different experience in this country than you,” Seales told Jenner. “Because as a black woman, the government is so much in my life, and it always has been. The government literally said that black men could not even be in the house or else women couldn’t get welfare. That’s a big reason why there’s such a chasm between black women and black men in this generation.”

While promoting the premiere of Season 2 of Insecure at the 2017 American Black Film Festival, Seales opened up about the conversation, revealing that she is not concerned if Jenner actually learned something from that moment. Rather, she has been more moved by the response she’s received about the clip from other black women.

Comedian & @insecurehbo star @amandaseales says she’s not concerned with how Caitlyn Jenner received the lesson she gave her on privilege. pic.twitter.com/vlfZ3uM6vh

The 35-year-old actress also shared three tips for women of color striving to establish a successful career in entertainment. Watch the clip below.