BLACK ENTERPRISE celebrates the 45th anniversary of its roster of the nation’s most successful black businesses—The BE 100s. To commemorate the significance of this collective’s widespread impact on black business and economic development as well as American industry over four decades, we have presented 45 milestone moments. As part of this tribute, we continue our yearlong countdown. 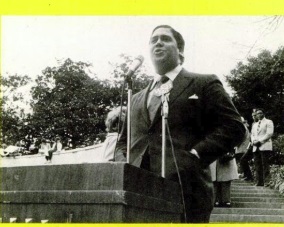 Jackson’s plan surfaced when he informed city leaders he was proceeding with the expansion of the then-named Hartsfield Airport. He shook up Atlanta’s old boy’s network with this: 25% of all contracts were allotted for minority firms. That those firms could land a big chunk of the project first valued at $450 million.

But some influential men in the South revolted, claiming the act was illegal. They urged the governor and state legislators to seize control of the airport expansion project from the Jackson regime. Yet Jackson did not flinch, reportedly stating: “We simply won’t build [the airport] if you don’t agree to this. You can have 75% of the project or you can have 100% of nothing. What is your choice?”

After a two-year battle, both sides agreed to a re-adjusted set-aside plan: a participation stake of 20% to 25% for minority-owned firms. Jackson action’s also set a benchmark for affirmative action programs nationally, including in big cities with large black populations.

In Atlanta, Jackson boosted the portion of contracts to minorities from under 1% in 1973 to roughly 39% five years later. Jackson’s efforts empowered the black middle-class, helped create many black millionaires and produce many BE 100s companies. Among them: H. J. Russell & Co., the nation’s largest black construction firm and No. 14 on the 2018 Top 100 list with $253 million in revenue.

“Jackson was like Dr. Martin Luther King Jr. when it came to ensuring African Americans got a chance to participate in the nation’s economic marketplace,” the late Herman Russell, chairman/CEO of the construction company, told Black Enterprise in 2009.

Russell added that his then $300 million company would not have been that size if not for Jackson’s policy. Russell added Jackson helped spur black development not only in Atlanta, but also nationally in cities including Chicago, Detroit, Los Angeles, and Boston.

Another victory for minority firms under Jackson’s watch came when he helped bring the 1990 Olympics to Atlanta. For instance, $10.7 million went to minority suppliers, and over 60% of the minority firms were black. Some BE 100 firms tasted the gold, including construction firms H.J. Russell and C.D. Moody, part of the team that won the $209 million Olympic Stadium project.

Illustrating his acumen in business, Jackson in 1987 started Jackson Securities L.L.C. It once was (No. 7 on the BE INVESTMENT BANKS list with $1.466 billion in senior/co-senior managed issues). In 1994, Jackson, and his daughter, Brooke Jackson Edmond, and food industry veteran Daniel Halpern, launched Jackmont Hospitality Inc., “He had a passion for being in business with his daughter. It was something he really cared about and enjoyed,” Jackmont President Halpern stated.

Based in Atlanta, Jackmont is a food-service management company and one of the fastest growing TGI Friday’s franchisees. It was No. 19 on the 2018 Top 100s list with $200 million in revenue.

In 2003, the same year Jackson died, one of the world’s busiest airports was renamed Hartsfield-Jackson Atlanta International Airport as a tribute to him.